With help from Hamilton County Job & Family Services, Obadiah Cheatham went from searching for a decent job to fielding offers from several employers. You might say HCJFS put him in the driver’s seat.

Obadiah Cheatham, and two of his brothers, took advantage of a program that pays for qualified Hamilton County residents to train to drive trucks. Workforce Investment Opportunity Act adult dollars, authorized by the Southwest Ohio Regional Workforce Investment Board funded the opportunity.

Last year, he worked a contract job out of town to support his family of four. The work was stable, but the hours were limited. He came home to work with his brother, a subcontractor for the City of Cincinnati. He and his brothers heard that having a commercial driver’s license would allow them to do a wider range of jobs. They went to Napier Truck Driver Training in Hamilton, where they learned about the HCJFS program.

He started class at the end of December. On February 8, he took his CDL test and passed on his first attempt. The next day, he had a job interview and was offered a job earning a $50,000 base salary with bonuses.

“When you have a CDL, it opens up so many different doors,” he said. “You are in demand.”

The training from Napier was thorough, thoughtful and supportive, he said.  It was a mix of classroom study and driving.

The students began the driving portion of the class by learning how to back up a truck and keep it straight. “That was the base to start from,” Cheatham said. 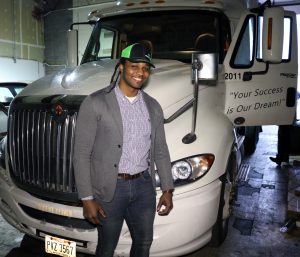 He said the instructors gave each student all the time they needed to get comfortable behind the wheel. The experience level of the students ranged from people who’ve driven manual transmissions and hauled trailers to those who’ve never driven more than a car with an automatic transmission.

“No matter where you started at in this program, you had the opportunity to get that comfort, to get that experience,” Cheatham said.  “The instructors would all make sure we had that comfort we needed to have to be successful.”

He said Napier focuses on safety in both equipment and driving. “You have a really limited amount of vision in a truck. You really have to plan ahead.

“Here at this school, they encourage us to get all the endorsements,” he said. Obadiah is qualified to drive tankers and double and triple trailers, as well as  handle hazardous materials.

In his orientation group at his new job, he was the only one with a Hazmat endorsement. “They were looking for that,” he said. His job is to deliver heavy equipment to oil drilling operations around Pennsylvania.

Cheatham has three daughters and a son. The oldest is 7, the youngest will be 1 in May. 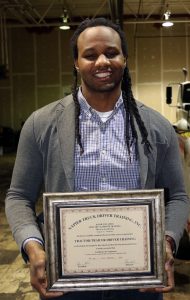 His job does require him to travel, but the job gives him a solid income to support his family and one week off every for two weeks he works.

“If someone has a regular five-day-a-week job, they get two days off, that’s four days in two weeks. I get three more days,” he said. “It’s like having a lot of mini vacations.”

This job suits him best for now, but he has other options for the future, including regional driving, or a job that gets him home every night. He is excited for his future.

“If you have your CDL, it’s like a whole other fast track,” he said.

His brothers Isaiah and Rashon are wrapping up their training in the next week or so. He is thankful for all those who helped him and his brothers. 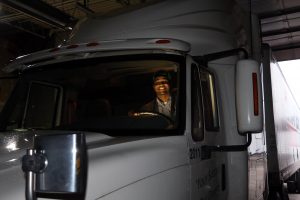 He said Napier Truck Driver Training and HCJFS have a good working relationship. “It seems almost seamless,” he said.

He said the people at Napier really care about the students. “It’s big, but it’s kind of like a family.”

Please visit the OhioMeansJobs Center’s website to learn more about the Southwest Ohio Regional Workforce Investment Board program that funded this opportunity, or for information on a similar program for food assistance recipients, click here to learn more.