From even the worst of circumstances, a resilient child can rise. But it usually takes help.

The chaos of poverty, substance abuse, foster care and other social ills can swallow up many young people. Most are overwhelmed by their circumstances and mere survival is success. There are others who rise to the challenge, not only surviving, but overcoming, achieving more than their peers or those who come from far more comfortable backgrounds.

In many cases, meeting the right person at the right time can make all the difference. Patrick Russell will tell you how much he believes in himself and how hard he has worked to overcome a difficult childhood. He will also be the first to tell you he probably wouldn’t have made it without the help of a mentor, Harry Blanton.

“Harry said, ‘Come live with me.’ He had just bought a house in Northside,” Patrick said. “He became my guardian in high school. If Harry doesn’t come into my life, I’m probably taking a different path in Price Hill.”

Patrick is carrying on that legacy. At one point, he had temporary custody of his sister’s son. He is also financially supporting a brother. He is the support that will – hopefully – lift someone from the type of chaos he knew as a child.

“Harry provided a support system in my life,” he said. “That has provided a trickle-down effect. I now have the ability to support people around me who need help. Everyone in our family takes care of each other.”

Blanton agrees. “”Patrick and I realize how important family is to your support system,” he said. “I always tried to keep him in contact with his parents and siblings when he was living with me.  As he got older, he became a huge support for his younger siblings and now even the next generation via his nephew, Shea.” 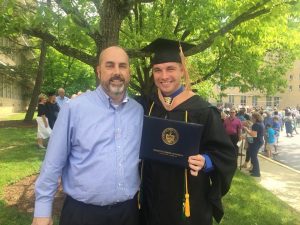 Patrick has three brothers and three sisters. His dad spent time in prison. His mom temporarily lost him to foster care while his dad was in prison.

He recalls the night he was placed in foster care. His anger issues brought Job and Family Services to investigate the family. He remembers a caseworker asking about the last time he bathed. Patrick recounts lying because he just wanted to go home.

The caseworker took him and his siblings from their home. Patrick spent eight months in a foster home in Winton Terrace. His siblings went to another foster home, splitting the siblings.  “When I look back, that night was the reason for us becoming involved in the system,” he said. “I had a lot of anger issues.” It wasn’t his fault. This incident just brought light to hidden problems.

His foster home brought temporary stability. His foster mother, Carmen, took him in as one of her own. She still calls Patrick her son and keeps in contact regularly. “I was the only white kid in the complex,” he laughed. “The barbers in the neighborhood had no idea how to cut my hair.”

Patrick has always been surrounded by people who saw his potential. As time went on, Patrick would encounter another person who would change his life.

Patrick’s mother was able to regain custody. “My mom had to jump through some legal hoops, attend drug rehab, go to counseling, they kind of give you a checklist you have to go through,” he said. “She eventually got us back.”

Patrick was attending Heberle Elementary school when he was recommended to be a mentee by the staff. His mother agreed. He was paired with Harry Blanton, currently vice president at HCDC, Inc., Hamilton County’s economic development agency.

“We would hang out every weekend, go to sporting events, go to restaurants, do things I had never done before.” Patrick said. As his life grew more chaotic over the next decade, Harry would become a constant support. “He bought me a phone to communicate with him,” Patrick said. “I didn’t tell him what was going on, but I am sure he knew. Harry is a smart guy.”

What was going on was that his mother eventually had two more children by other men, also temporarily losing them to the child welfare system. She would cycle in and out of rehab. There was domestic violence. The family moved from apartment to apartment. He lived with other people at different times. There were times they had no food or hot water.

Meanwhile, his father, released from prison, moved to a trailer in Mason and tried to re-establish ties. They spent time together, but it was far from perfect. Patrick wishes he had some of that time back. “He was diagnosed with cirrhosis of the liver,” Patrick said. “He was a heavy drinker. He passed away in 2013.” Patrick recounts his father being one of the smartest people he knew, but he made some bad decisions that ultimately led him to a different path in life. Patrick was fortunate enough that his dad was able to see him graduate high school and college. It saddens Patrick to think about his dad not being there for his wedding and his first child.

Patrick’s relationship with Harry blossomed as he grew older. Harry continued to see Patrick every week. A St. Xavier High School graduate, Harry saw Patrick’s potential and set him up to take the entrance exam. “I took the test and bombed it,” he said. “Harry was able to reach out to the school and see if there were other options. I was able to attend the Companion Scholars Program. I took classes in the summer. The program allowed me the opportunity to see if I could handle the workload of a college prep school. Ultimately, the school took a chance on me and accepted me into St. Xavier high school.”

The Companion Scholars Program is an academic enrichment program developed by St. Xavier High School for young men from various Cincinnati-area schools who are selected to participate based on grades, behavior, and potential leadership skills. The opportunity led to tremendous success, with Patrick ultimately graduating from St. Xavier High School. During his high school career, Harry became Patrick’s guardian and Patrick moved in with him.

For most kids with Patrick’s background, a diploma from St. Xavier High school is a huge success. But Patrick didn’t stop there. With the help and support of those around him, that St. Xavier high school education led to a degree in International Business at Xavier University. He became the first person in his family to get a college degree. He went on to obtain his master’s degree from Mount St. Joseph’s University in Organizational Leadership.

“Patrick was always a self-starter,” Blanton said. “I helped open doors for him, but he ran right through them and worked really hard to open doors for others.  I never had to monitor his homework, never had to wake him up in the morning.  He was always ready to go.  He is also one of the nicest and funniest guys to be around, so he has good interpersonal skills, as well. He is part of my family and we love him.”

Patrick worked hard, sometimes two or three jobs at a time. A job at TriHealth led to meeting his fiancée, Ashley Barndollar. They were married in January. They recently bought a house in Mount Washington. Patrick now serves as an Area Manager at Amazon in the Prime Pantry sector. He spent time on the board of directors for the Cincinnati Youth Collaborative, giving back the organization that introduced him to Harry so many years ago.

More importantly, he is taking care of others, as Harry took care of him. He financially supports his youngest brother Brian. He plays a big role in raising Brian to provide him the guidance that others did for him at this age.

“Brian is a huge success story,” he said. “He has always gotten straight As. He lives in Price Hill with my mom. He took the test for St. Xavier and scored really high. He was a direct admit. His education is fully funded through grants and scholarships.”

Patrick even took on additional parental responsibilities when his sister lost custody of her child. Patrick had temporary custody of his 2-year-old nephew Shea for 5 months while his sister was able to get back on her feet. “It was a rewarding experience,” he said. “There is a time during your life when adverse childhood experiences (ACE) can affect long-term health and success. It is so important that Ashley and I were able to build structure for Shea during those times of adversity.” 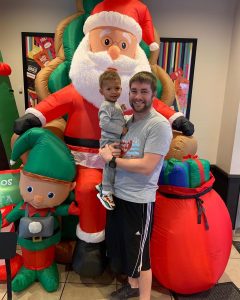 He encourages others – those who share his background of poverty and foster care – to look around to see who is a part of their support system. “You may not know it, but there are always people trying to help you. There were moments when I almost gave up and there were people there holding me up,” he said. “You can find it in a caseworker, a foster parent, a best friend, a mentor. You have to find someone who shares your goals and aligns with your goals. Reach out for support and then put in the work. People are going to fail, but you have to keep working toward your goals. You can’t give up. If I gave up where would I be now?”

Patrick’s success is a true testament to the power of a mentor, teacher, foster parent, social worker or someone else who plays a role in a child’s life. The potential impact is literally life altering.