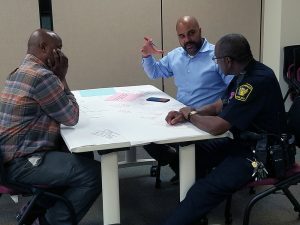 An effort to better serve fathers in Hamilton County will re-launch next year after a two-year hiatus.

The collaborative is meant to give community members a tool to meet challenges specific to fathers when dealing with community service organizations.

The original Hamilton County Fatherhood Collaborative started in 2012 and ran until 2016. While the early efforts and activities of the FCHC showed great promise, the lack of full-time leadership and ongoing funding necessitated a pause in operations.

Many in the community, including Michael Patton, a JFS assistant director with a focus on fatherhood, didn’t give up on the idea. With the encouragement of agency director Moira Weir, Patton worked to establish a framework within the agency to support the collaborative and also make the agency more responsive to fathers. 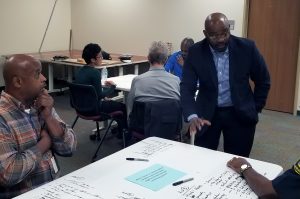 Calvin Williams joined the agency in 2018 as a fatherhood coordinator. Williams has been associated with many programs and agencies during his 27 years in Cincinnati, including the Genesis men’s program, SUMA Fatherhood Project and Lighthouse REAL Dads. He also is former co-director of the Community Building Institute at Xavier University. Williams is leading the father-focused efforts.

Recently, former FCHC members and others from the community with an interest and passion for fathers and fatherhood began discussions to revive the effort. Rather than simply starting from where the FCHC left off in 2016, the goal is to find new ways to do the work that is needed. The group worked to address these questions:

This pre-meeting has set the stage for the February 2019 re-launch. Then, the FCHC will begin to meet bi-monthly at the Center for Innovation at Xavier University with a new mission, new vision and new strategies for the work ahead.