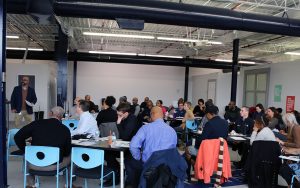 An effort to better serve fathers in Hamilton County returned this week after a two-year hiatus.

The inaugural version of the Hamilton County Fatherhood Collaborative operated from 2012 to 2016. Building on that good work, Hamilton County Job and Family Services has revived this effective county-wide fatherhood initiative.

You can find more information about the collaborative at HCFathers.org.

We need fathers to join our effort. We ask that fathers, father- and family-serving programs, along with the business, government, philanthropy, health, arts and other sectors of the community, join this effort to lift up and support Hamilton County’s fathers. If you are interested in advancing the cause of fathers in our community, please reach out to Calvin Williams, fatherhood coordinator at Hamilton County Job and Family Services. He can be reached at 513-946-1123 or willic21@jfs.hamilton-co.org.

Williams joined the agency in 2018 as a fatherhood coordinator. He has been associated with many programs and agencies during his 27 years in Cincinnati, including the Genesis men’s program, SUMA Fatherhood Project and Lighthouse REAL Dads. He also is former co-director of the Community Building Institute at Xavier University. Williams is leading father-focused efforts at HCJFS.

Williams said the initial meeting, held Tuesday, was a success. The 35 people in attendance represented 18 different institutions, agencies or programs that included public, private and community-based organizations. “That diversity is exactly what we sought as it will be key to the collaborative being an effective and truly county-wide initiative,” Williams said.

Michael Patton, the HCJFS assistant director for fatherhood initiatives, gave a presentation about new legislative changes to Ohio’s child support system that are designed to be more equitable for both parents.

Wesley Bugg from Reaching our Brothers Everywhere, spoke about partnering with the collaborative

Brittany Pope of Ohio Guidestone spoke about a paternal depression study they are conducting.

Patton said he was extremely happy with the turnout for the meeting.

“I felt the excitement in the room and several participants shared comments conveying their personal appreciation and excitement for the future of the collaborative, Patton said. “We are off to a great start and can’t wait to plan the next meeting.”

The goal is to create awareness and sustained community conversation about the value of fathers and their contributions to healthy children and families. At Hamilton County Job and Family Services, the importance of fathers in the success or failure of the family unit is clear. Our Children’s Services program, Child Support program, public assistance programs and workforce development programs are filled with fathers who play incredibly important roles in the success of their children’s lives by simply being active and engaged.

Issue by issue, fathers show up as significant prevention, mitigation or success factors. The Hamilton County Fatherhood Collaborative wants to amplify that message and activate fathers around it. We want to raise expectations for fathers in our community. Fathers and father figures of all types can mean as much, or more, collectively as they do individually. This effort will be broad-based, inclusive and diverse.

Filed Under: About Us, News