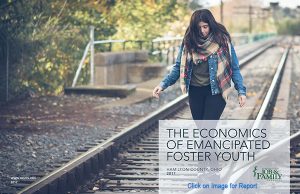 The study is the first comprehensive local look at the financial impact of how children who emancipate – aging out of the system between age 18 and 21 without a permanent situation with a dedicated, caring adult – can cost local residents millions of dollars more than their peers in the general population.

The report examined 864 youth who emancipated from Hamilton County Job and Family Services from 2008 to 2015 and assessed their financial impact locally based on the results of national and regional studies. Those costs are related to the youths’ involvement in the criminal justice, homeless and health care systems, as well as lost productivity because they are not employed at the same level as their peers in the general population.

The costs are in line with what occurs regionally and nationally. Study after study has shown foster children are more likely to drop out of school, experience an unplanned pregnancy and become homeless, under-employed, uninsured, involved in the criminal justice system or social service system. While 80 percent of foster children express a desire to earn a college degree, less than 10 percent actually do.

The UC study, also sponsored by Ohio Reach and the Harmony Project, found that, on average, 108 young people emancipated annually from Hamilton County JFS during the study period. It applied outcomes to this population based on the results of national and regional studies, such as the well-known longitudinal study, The Midwest Evaluation of the Adult Functioning of Former Foster Youth, which examined outcomes for emancipated foster youth up to age 26.

By applying outcomes from those studies to Hamilton County youth and evaluating them against the outcomes of their peers in the general population, the Economics Center found that Hamilton County’s emancipated youth annually may cost society:

• $8 million in health care expenses (mental health or substance abuse treatment, emergency room visits, hospital stays, uninsured child birth)
• $2 million a year in criminal justice expenses (arrests, convictions, incarcerations)
• $73,000 in homeless expenses (shelter expenses)
• $7.6 million in lost productivity because they are unemployed or underemployed
The study did not factor costs related to the child welfare system. Nor did it take into consideration the long-term effects on self-esteem and emotional well-being from experiencing childhood trauma.

Moira Weir, director of JFS, said the UC study confirms the agency’s anecdotal experience. She noted the study focused on youth age 25 or under and that many problems compound as they age, so the actual costs are even greater and the gap in productivity is wider throughout their lifetime.

“We have taken many steps over the years to better prepare our foster youth for the challenges they are going to face, but we know that, no matter the preparation, any young person who suddenly finds themselves alone at age 18 or 21 is going to struggle,” she said. “This study puts a quantifiable number on the cost to local taxpayers and makes a strong argument for investing in prevention programs that will mitigate those costs.”

The good news: community interventions can have a positive impact on those costs, including a promising local mentoring program that has a powerful return for foster youth.

The study looked at one intervention study and its effect on emancipating youth. The Higher Education Mentoring Initiative, put in place in 2009, was found to have a positive result on participants: they were more likely to have a job, less likely to become pregnant and less likely to be involved in the criminal justice system, among other findings.

The HEMI program pairs foster children in high school with a mentor to help them graduate high school and move on to some type of higher learning or sustainable career path. Mentors commit to long-term relationships that involve at least one hour a week in person and constant availability via phone, text, email, etc.