Home|Important Updates|From the Director|From the director: Helping parents get back on track with their child support
Sign up for our newsletter

From the director: Helping parents get back on track with their child support 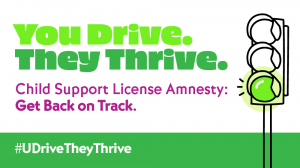 Have you seen our You Drive, They Thrive campaign yet? Every August, we honor Child Support Awareness Month with an amnesty offer to parents who have had a license suspended because they failed to pay child support.

We can suspend driver’s licenses as well as professional licenses, such as a license to cut hair. Our goal isn’t to punish anyone. In fact, we want to help obligors get back on track. Custodial parents need this money so they can meet the needs of their children. We worked an average monthly caseload of almost 60,000 last year and collected more than $124 million.

Under our amnesty program, parents who are delinquent on payments make arrangements to pay and then get their licenses reinstated. We know the offer works. Last year, 40 percent of the obligors who took advantage of it were still paying support six months later.

Most parents do pay their support. We thank them. But if you know anyone who is struggling to pay, please tell them to contact us. We want to help them get back on track.

Posted on August 4, 2022 by Jane Prendergast

Filed Under: From the Director, News